Hong Kong activists are using telegram groups to orchestrate the mass coordinated reporting of pro-China accounts in an effort to manipulate the platform. As identified by an account dubbed “Joshua Wrong“: it has been revealed that activists are running an organized effort known as the “五毛集中解決區” or the “Twitter Wumao Centralized Resolution Area“. Here, pro-China leaning accounts are identified, surveyed and instructed to be flagged under specific reasons by the group, organized by a bot. The effort has roughly 1800 members.

It describes itself as follows: “This channel is affiliated with @twittermansyunzou , which focuses on reporting all kinds of wumaos. Give priority to the wumaos with a large number of followers. Capture wild fifty cents can pm @WumaoGaiKyutKeoiBot
admins will put on the channel after reviewing, *please please fill in the link*”

How does this work? The group is aiming to carefully manipulate twitter’s algorithm by identifying given keywords which can be processed as a violation of the rules, and then to flag those given entry points in a large number in order to slap automated bans on the targeted account. As an example, on Wednesday the group zoned in action on the Chinese Hui Muslim Temur (based in Australia).

Having stated the word “warpig” in a tweet, the group admin clearly instructs underneath which twitter rule the comment is deemed to violate and thus what the group ought to follow on report. As a result, Temur was mass reported on August 12th for “hateful content” by at least 77 of its members. 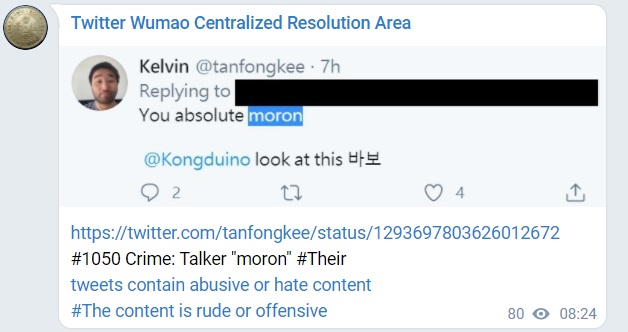 The group has subsequently celebrated the accounts which it has got banned, including the Chinese Muslim Fatimah earlier in the given week: 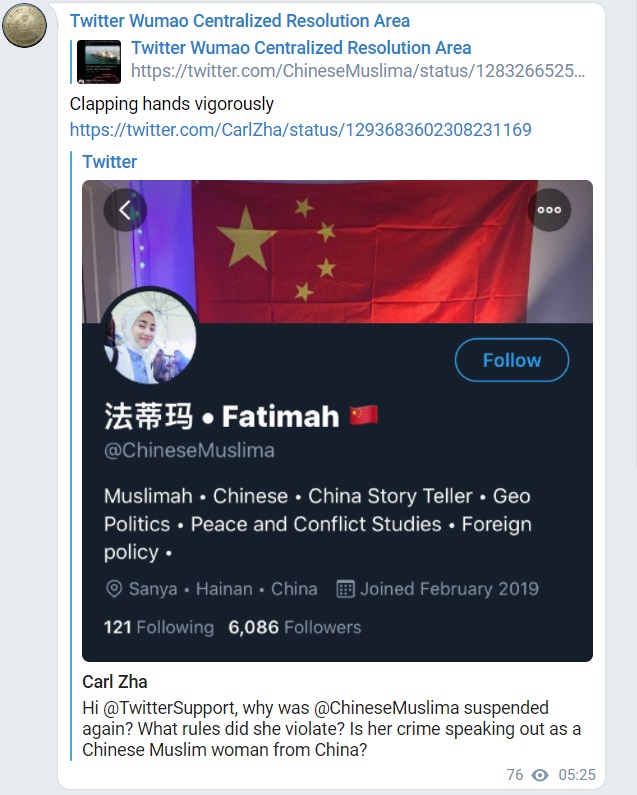 The existence of such an organized effort to stifle dissenting voices is not surprisingly a huge violation of twitter’s “Platform manipulation policies”- and seems to be repeated in how activists also mass coordinate replies to China related news items, or given individuals. Never however, do we hear about any action being taken against these forms of accounts, as twitter assumes that only “state actors” can manipulate the platform.

Mainstream Journalists also happily ignore these efforts and refuse to report on them, nor do any “think tanks” consult with twitter on such blatant abuse of the system in the pursuit of political objectives.

Note: If you are a pro-China user, you must be careful to ensure you do not give the activists a “casus belli” to target you. To do so, ensure your twitter discourse is strictly civil. Avoid using any insults, foul language or rude words, even terms such as “Moron” are being spotted and flagged for mass targeting. Twitter has repeatedly demonstrated it is not a neutral or balanced arbiter on this issue and appears to favour their activities, innocence does not mean exoneration, hence the Chollima Report itself was previously banned.