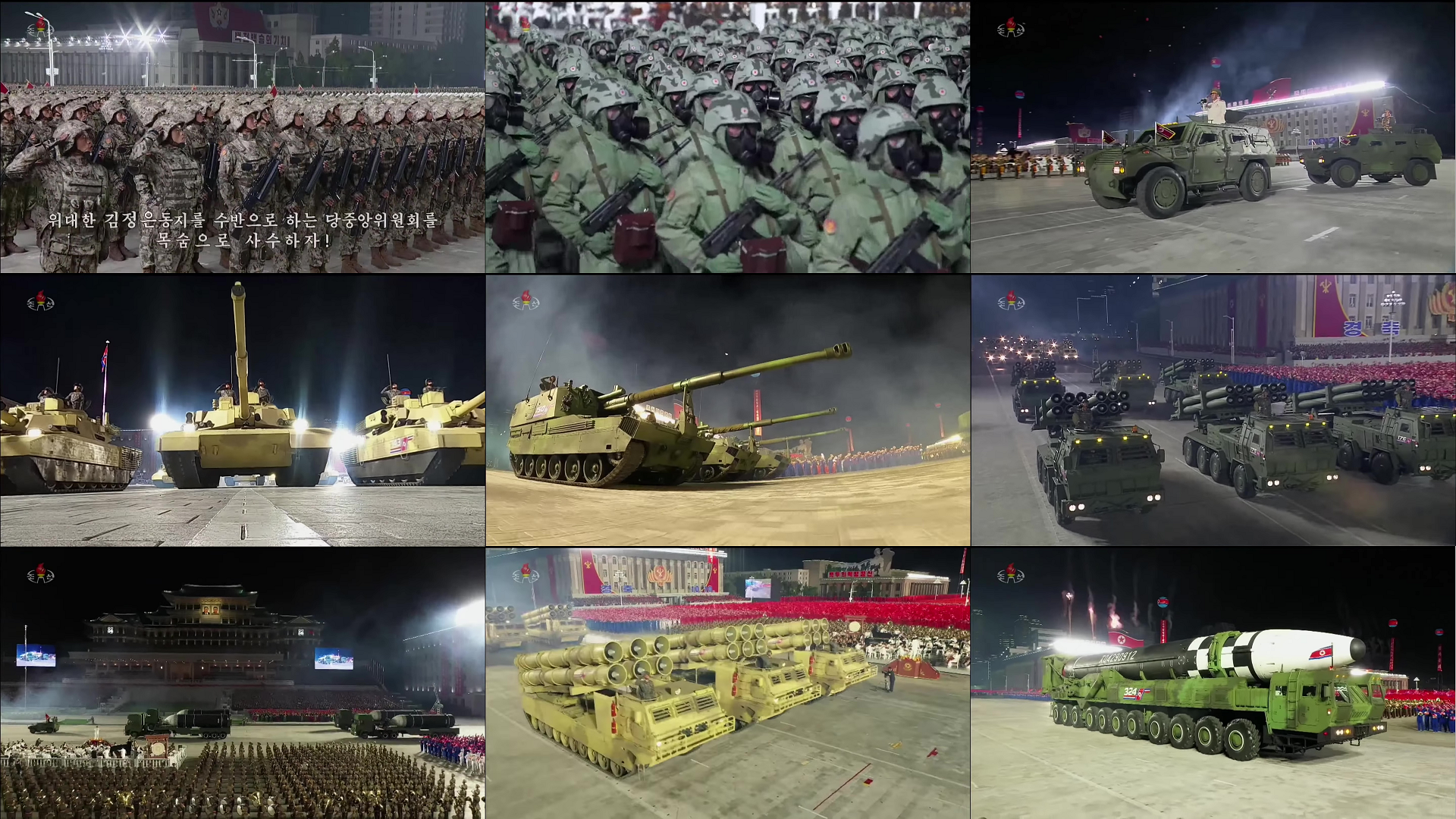 After midnight on October 10th before dawn, a military parade in celebration of the 75th anniversary of the foundation of Workers Party of Korea with the Armed Forces of Democratic People’s Republic of Korea marching with thousands of soldiers, hundreds of vehicles and dozens of aircrafts participated in a military parade in the early morning.

Soldiers marched on with kevlar or aramid based helmets and body armor with inserts for ceramic plates to protect against general purpose cartridges such as 5.56x45mm and 7.62x54mm used by NATO member countries along western hemisphere aligned countries such as South Korea and Japan in East Asia allied to the United States..

Along new helmets and body armor as presented in parade as standard equipment is weapons for infantry such as carbine assault rifles based on Type-88 that is derivative of Soviet AK-74, along a bullpup assault rifle configuration AK type rifle with magazine used by AK-74 that is similar to Russian OTs-14 Groza and not exact in detail in various areas hence possibly of an indigeneous development or heavily influenced by OTs-14 Groza design. Another is a submachine gun of clearly AK based design reminiscent of Russian PP-19 series of designs such as Bizon and Vityaz with former helical magazines and latter boxed, submachine gun at parade had a boxed magazine with North Korea using several types of ammunition that PP-19 series were chambered such as 9x18mm Makarov, 9x19mm Parabellum and 7.62x25mm Tokarev hence could be chambered for any of these.

Evidently in the parade, many of the soldiers marched with Type-88 assault rifles with helical magazines which PP-19 Bizon was famous for and we now see a submachine gun similar to PP-19 series during this year’s parade that makes it hard to see as just mere coincidence with the benefit of hindsight. Suppressors on various firearms as too telescopic sights had greater presence at the parade than helical magazines, some had just suppressors while other telescopic sights, some had both attached on them. Many of the soldiers were equipped with earphones that had a microphone along some with analog amplified image intensifiers reminiscent of American PVS-7 that is a 3rd generation night vision goggles along a female only unit having on left forearm a device that could be described as Personal Digital Assistant type used for possibly for rear area  logistics.

Soldiers armed with an AK based sniper or dedicated marksmanship rifle that may be based on Yugoslav M76 have had their guns camouflage along dressed in Ghillie type camouflage suits with a color scheme of forest green and then those in protective suits and gas masks against biological and chemical weapons. Also, some soldiers were equipped with flashlights and some also had laser sights with them.

After infantry marched, various vehicles rolled in square and first of peculiar note was an armored scout car very similar to Komatsu Light Armored Vehicle produced in Japan and currently in service under Japanese Self Defense Forces, seen in service in the Iraq War. This vehicle was the lead for the majority of various groups of various vehicles in formation of 3 rows with 3 vehicles each.

First such group was the domestic version of Soviet BTR-80 Armored Personnel Carrier design in 6×6 configuration with turret that houses 8 canisters in 2 rows each having 4 canisters. The purpose of this vehicle is apparently an anti-tank role by launching guided missiles due to similarities to Israeli Spike NLOS or Chinese HJ-10 systems that have a range of over 10 kilometers which is range beyond line of sight.

Second group of vehicles are an 8×8 design that is strikingly similar on the surface at least to the Infantry Carrier Vehicle Stryker made in the United States of America and operated by its armed forces. Armed with a derivative of Russian AGS-30 automatic grenade launcher along 5 canisters very similar to one used to store 9M133 Kornet laser beam riding anti-tank guided missiles which North Korea received examples from Syria and funding in order to reverse engineer it. This vehicle unlike Stryker has an engine at the rear, but another model of the same chassis has an engine where Stryker has, between where the driver is and where the crew and passengers are, this model is similar to Stryker Mobile Gun System. It is also armed with 30mm AGS-30 and the cannon has features of D-30 due to protective cover for buffer tubes above the barrel and with similar muzzle break, although size of the cannon is smaller as evident that is seemingly proportionally smaller in length and diameter hence likely that it may be derived from 85mm cannons used on North Korean Type-82 amphibious light tanks.

Next group is a previously unseen main battle tank, a new design that seems to take cues from Russia, China and the United States that it combines. Chassis has 7 axles with length and diameter ratio similar to Russian T-14 Armata along on its turret an Active Protection System similar to one embedded into T-14 Armata’s turret. Design of the turret seemingly combines Chinese Type-99 and American M1 series of MBTs. Armament of this 125mm smoothbore cannon derived from Soviet 2A46 along coaxial machine gun chambered Russian 7.62x54mmR, on the side of the turret it is ATGM derivative of 9M133 Kornet and close to it laser guidance system. On top of the turret there is AGS-30 AGL, it is apparent that there are laser warning receivers on the turret and muzzle reference devices on the tank and main gun. Gunner and Commander have much larger boxes containing sighting devices than on previous tanks that could mean either an advanced analog image intensifier for night vision and or thermal cameras.

After new MBTs are Self Propelled Howitzers that were unveiled in 2018 and are similar to South Korea K9 Thunder at a glance, armed with 152mm gun that is considerably longer than that of K9 along a box above the gun that may be artillery radar used to assist  accuracy by determining deviations and accordingly apply adjustments,also has dual configuration of AGS-30 AGLs and Laser Warning Receivers. Estimated range with standard ammunition is 40 kilometers and with rocket assisted up to 60km.

After SPHs comes the new Multiple Rocket Launcher System that replaces older ones known as M1985 and M1991 that launch well established 240mm rockets. Just behind those MRLS are new chassis for 300mm KN-09 guided rockets that adds an additional axle and 4 more tubes for a total of 12 rocket tubes which is equal to Russian BM-30 Smerch and for which it will be compared to as an equivalent with exception in terms of range as KN-09 has range of 200km while BM-30 at most 90km. Right behind those are 600mm KN-25 guided rockets with 380km range have three configurations, 8 by 8 wheeled chassis with initial variant having 4 tubes and newer variant having 5 tubes with 11 axle tracked chassis having 6 tubes in total.

Behind the series of rocket artillery comes Coastal Defense Cruise Missile system that launches Kumsong-3 anti-ship cruise missiles derived from Kh-35, they are on a new chassis that are also tracked, it has 8 compared to previous one having 4 tubes containing them. It is more inline with Bal-E CDCM with the difference Bal series being on a wheeled type of chassis.

Right behind the CDCM is Pukguksong-4 cold launched solid fuel missiles on a trailer intended as submarine launched ballistic missile, dimension estimates based on available images from the parade by various missile experts and enthusiasts around the world put Pukguksong-4 at being larger than Pukguksong-3 hence possibility of being intermediate ballistic missile that is able to reach Guam and beyond..

Then we have a short range surface to air defense system on a wheeled towed chassis very similar to Russian Tor and Chinese HQ-17 that have a range of 15 kilometers and can intercept targets up to 10km. After it is apparent a new configuration for Pon’gae-5 being Soviet S-300PMU1/PMU2 equivalent long range SAM with 100-150km range.

Following it are transporter erector launchers on a tracked chassis for Pukguksong-2 cold-launched medium range ballistic missiles from 2016 which presence at parade is to demonstrate that it has been mass produced. After it is possible missiles for the known SAM system in development, known as Pon’gae-6 which its development is speculated to have performance goals to be comparable to Russian S-350 or S-400 SAM systems, but I have entirely different theory as to what it is for which I will express in the next published article about what this could be.

After those are KN-23 quasi-ballistic missiles similar to Russian 9K720 Iskander-M with range of nearly 700 kilometers, paraded in a 8 by 8 tracked TEL that was previously used and tracked chassis with different cabin and storage. Right behind those are KN-24 that superficially similar to American MGM-140 ATACMS, but are far larger with far greater performance than it and on it was first used tracked TEL chassis that other systems such as KN-25 and tracked chassis of KN-23 are using.

Next two systems are Hwasong-12 IRBM and Hwasong-15 ICBM in their respective TELs that were tested in 2017 with HS-12 able to reach Guam that demonstrated range at minimum energy trajectory of 3700km and HS-15 at highly lofted trajectory converted to MET would range entire mainland of the United States of America with payload of roughly 700kg which is much more than 260 to 350kg estimated weight of North Korean thermonuclear warhead with yield by some estimates of over 300 kilotons of TNT.

Last system in the parade is the new ICBM larger than Hwasong-15 and is dubbed in the media and by missile experts as Hwasong-16 with various estimates made about its performance that range from 2000kg to 3500kg payload to entire continental part of the United States of America with clear capability to carry multiple reentry vehicles with possible independent targeting for each of the nuclear or thermonuclear warhead.

At this year’s parade, leadership of Democratic People’s Republic of Korea has shown extensive  modernity of their armed forces that has the military hardware to defend itself from any of its neighbours and that any belief of military superiority by its neighbours are outdated involving conventional conflict. While its nuclear assets are a clear message to the leadership of the United States of America that the potential of nuclear annihilation is no more one sided as they will face consequences and will be struck back  against.