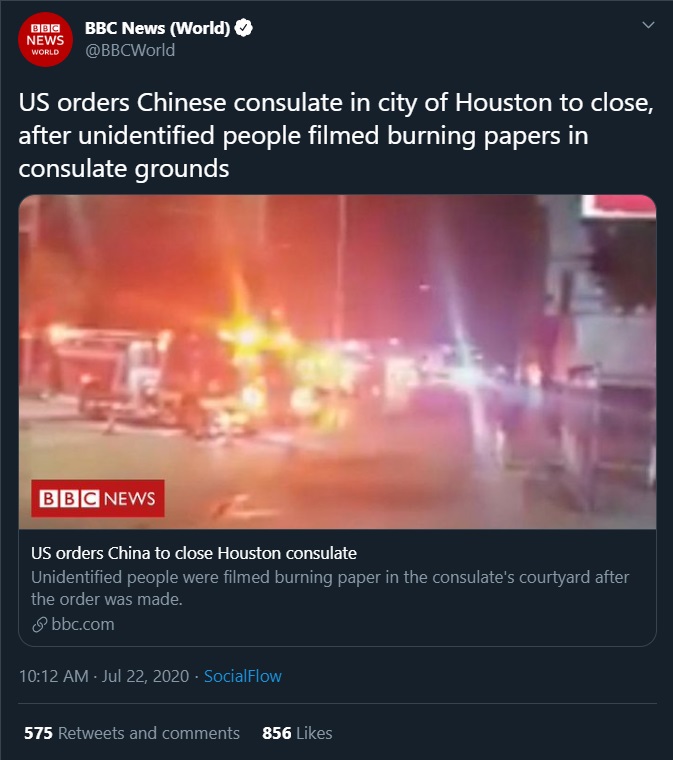 After the U.S State Department demanded the closure of the Chinese consulate in Houston on Tuesday night, hours before the announcement became public scenes emerged in the city of unidentified individuals burning what appeared to be documents outside of the building. It later emerged that the administration had given the building’s staff 72 hours to leave the country.

However, BBC World’s official twitter account proceeded to present the situation in a way which indirectly gave the impression that the Consulate was burning the documents as a prior action and that the expulsion was a retaliation to this. It stated: “US orders Chinese consulate in city of Houston to close, after unidentified people filmed burning papers in consulate grounds”

Although this error is avoided in the specific article itself, as well as on the BBC News home page, nevertheless it was noticeable enough to incur a number of objections in the replies:

I reckon they burnt the papers because they were ordered to close, not the other way around like your headline says.

The BBC has persistently been accused of biased coverage in its dealings with China related matters, enabled by an ideological disposition from the broadcaster which believes it has a duty to promote “British values” slanting the objectivity of its coverage and leading to the unnecessary repudiation of certain western foreign policy narratives.