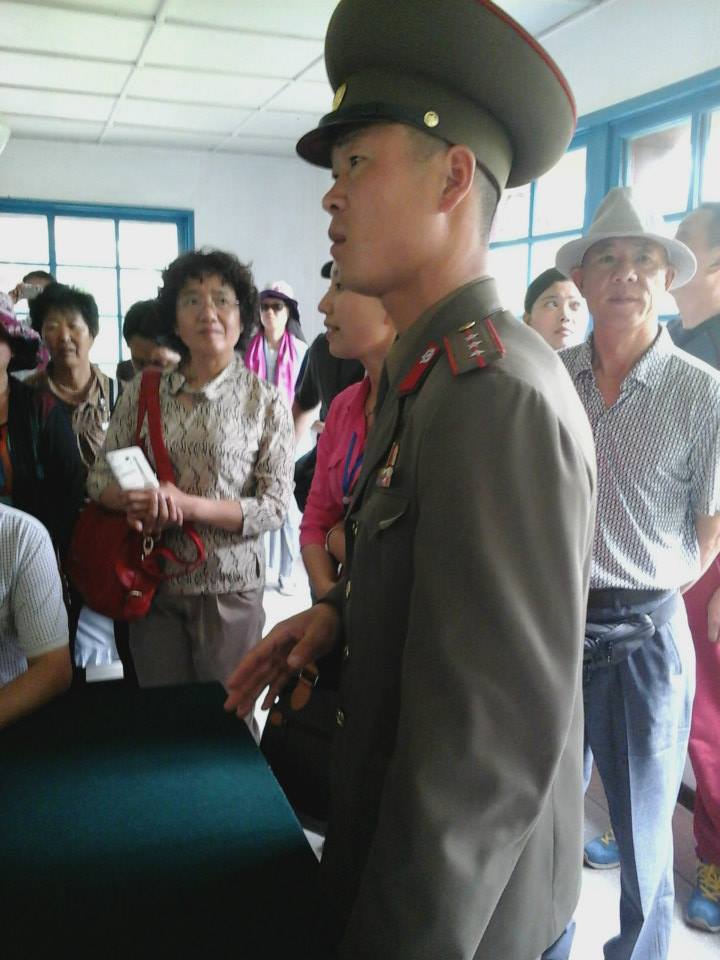 As a news report originating from the AFP notes, Chinese tourists are “invading North Korea“. Every day, a reported 1000 visitors from China are streaming into the DPRK by train and plane. If one is commuting to the DPRK, they will inevitably witness extremely bustling scenes at Dandong Railway Station (the Chinese border city). The carriages of the 10.00am morning train are stacked full and as you can imagine, noise or “热闹” (renao) is abounding. One could only assume from it that despite the huge differences between the two countries, China-DPRK ties are truly warming up, not least in light of Xi Jinping’s upcoming visit.

But is that really the case? Is this Chinese tourism phenomenon really as big as the media makes it out? Are Chinese truly interested in visiting their historical ally? And is it really all that profitable for Pyongyang? Not really. As with all mainstream reporting, there is always a twinkle of exaggeration and sensationalism in the need to sell a story. In a broader context, Chinese tourism to the DPRK is barely relevant at all in proportion to their travel to other regional states. Instead, Chinese visitors to the DPRK tend to be on average older and more ideologically attuned to the legacies of Maoism, with many younger Chinese viewing the idea of travel to North Korea with displeasure, contempt and even fear. This analysis builds itself on years worth of travel experiences to the DPRK and interaction with Chinese tour groups, as well as a history of interactions with younger Chinese (20-30 years) over the years. It paints a startling contrast.

Chinese tourism is somewhat infamous in Asia. It’s a big money winner for most regional countries, but its never popular amongst respective locals. Interactions with Hong Kong residents, South Koreans, Taiwanese and others bring up inevitable complaints and jokes about what they see as loud, unruly and rabble like PRC tourist groups. Without endorsing these stereotypes, it is fair to reference them as a tangible component of public discourse in regional countries. Chinese tourism is abundant, but does for that matter the DPRK really scale quantitatively on these countries?

Although stats are difficult to come by, over 237,000 Chinese visited the DPRK in 2017. The sheer size of the groups allows prices to be considerably less than western companies, roughly around $300. Whilst clearly there is evidence that the number of Chinese tourists is growing, this is nothing compared to Chinese visitors elsewhere. For example: Over 10 million Chinese visited Thailand in 2018 alone, 2 million visited Taiwan, 3.4 million visited Vietnam and so on. Even if we were to quantitatively assume 1000 Chinese a day visited the DPRK (despite seasonal fluctuations) every single day this year that would amount to little more than 10% of some of these totals overall. This is far from a “Chinese tourism boom” to Pyongyang.

Instead, despite talk of a “historical alliance” between both of these countries, in reality vast social and political differences, as well as Pyongyang’s total irrelevance to contemporary Chinese lifestyle and culture, continue to render the country an obsolete, bizarre and unfavourable destination. When witnessing these Chinese group tours over a number of years, the prominent demographic was in fact 40-60 years old from less educated, albeit urban hukou, backgrounds. Many of these individuals had sympathies for Maoist political thought which they were quite open and enthusiastic about. As a notable example, in 2015, a 50 something Chinese man approached the author and stated in Mandarin “Mao Zedong says that the United States is a paper tiger“. In 2019, the author witnessed hoards of Chinese wearing Mao lapel pins as a group, as well as some individuals who were veterans of the People’s Liberation Army.

In sharp contrast, young, cosmopolitan and educated Chinese do not at large share this enthusiasm for visiting the DPRK. When discussing tourism to the country with this demographic, they are likely to signal interest in hearing about experiences there but nevertheless express reservations on grounds that the country is “dangerous” and unfavorable. As one incredibly wealthy Chinese who travels all around the world quoted bluntly once: “I’m not going to North Korea“. Other responses touched upon perceptions of the country’s poverty, perceived backwardness and described those who do go as simply being interested in “seeing the old China” out of “nostalgia” than being a serious tourist destination. In essence, their descriptions of it seemed to match the criterion set out above.

As a result, these indicators help remind the public that China-North Korea ties are not as close as they seem. In more than a few ways, the relationship exists upon a lifeline of nostalgia. The symbolism of China fighting together with a neighbouring country nearly 70 years ago has no relevance nor influence whatsoever on contemporary life. Since that time, the two countries’ politics, societies and economics have diverged deeply. The DPRK’s economic struggles and complete inability to project its cultural influence abroad has rendered it having any soft-power influence on China at all. Apart from disruptive news stories of nuclear and missile testing, young people in the PRC do not think nor yearn for the DPRK either directly, or indirectly. Ironically, the same cannot be said for South Korea. There is no intrinsic appeal to facilitate it as a tourist destination.

In this case, Chinese tourism to North Korea is in fact a niche phenomenon, especially when compared to that of visits to other countries within Asia. Cutting across generational and class lines, it thrives upon very specific political nostalgia. On that note, it is important that its influence is not over-estimated. The DPRK is not a thriving tourist hub which is outdoing other countries in terms of travel revenue.