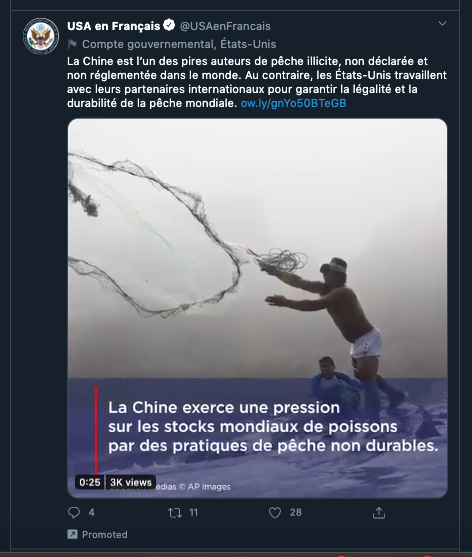 Embassies of the United States are using twitter to sponsor Anti-China adverts in targeted countries, a freelance journalist based in Dakar, Senegal, revealed on the platform this morning.

The advert, posted by the US Embassy in France, proceeds to accuse China of overfishing in the waters of the African country and breaking international law. The ads come despite twitter having implemented a ban on “state backed media” sponsoring content on the platform last year which was used to primarily target China.

The usage of the French embassy to do this, as opposed to in Senegal itself, the former colonial ruler of the West-African nation, suggests the effort is orchestrated deliberately to circumvent local protest or diplomatic objections. The activities come despite a popular discourse of Chinese “wolf warrior diplomacy” where diplomats are accused of being aggressive or confrontational when standing up for China’s interests.

What is also significant about this is that the Western media has also accused Chinese embassies of spreading “misinformation” against the United States on twitter, with a specific focus on the activities of Foreign Ministry Spokesperson Zhao Lijian. Can you imagine what the reaction would be if China started sponsoring adverts pushing anti-American content in countries they are not based in? How is this in any way acceptable?