Hong Kong Protesters Gather At IFC Mall and Call for U.S Military Action Against the City 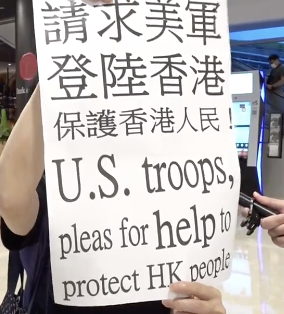 On Monday 25th May a small group of Hong Kong protesters gathered at the prestigious IFC Mall in Central, Hong Kong and called for the United States to send troops to Hong Kong to “Stop China” from implementing the National Security law.

The announcement by the country’s National People’s Congress, which holds constitutional jurisdiction over the Hong Kong Special Administrative region and the right of interpretation over its Basic Law, has triggered a fresh wave of unrest and violence in the city.

The city’s Dimsum Daily reports at about 60 attended the protest in the evening and departed around 8pm. Despite the demands of those participating, the event was relatively peaceful and there were no reports of violence, unrest or clashes.

Beijing states that the call for such a national security law is necessary to prevent treasonous, secessionist and insurrection activities. Asking for U.S military action against one’s own city is likely to solidify the justification of such claims.