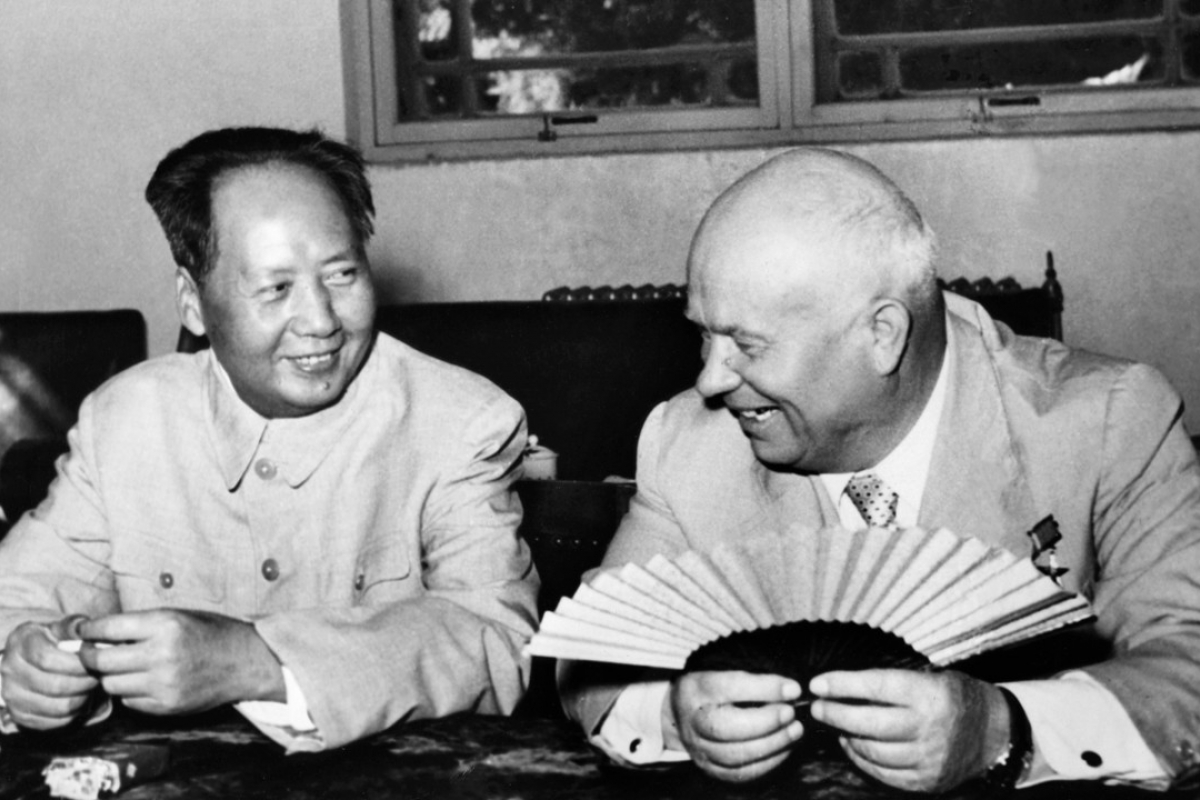 The political relationship between China PRC and the Soviet Union was always a fragile one. Although formally aligned on paper following the Sino-Soviet Treaty of 1950, the two countries had sparring geopolitical ambitions which repeatedly played out into the open. Prior to having recognized the PRC, Stalin sought to create an independent Soviet Republic in Xinjiang (East Turkestan) and when Mao Zedong finally made his visit to Moscow, the USSR chairman left him out in the cold for many days, as the former famously quoted regarding his wait in the Soviet Capital: “I eat, sleep and shit”.

The treaty nevertheless seen China adapt many aspects of the Soviet political system and economy. The inaugural foreign policy of Mao Zedong was known as “Leaning to one side” and thus relying on what was the world’s first Socialist state in order to build a model of governance for themselves. Despite this, Mao Zedong had always sought to paint himself at the center of the Communist world and as a leader in its own right. As a result, the death of Josef Stalin only three years later in 1953, and the subsequent policies of Destalinization advocated by successor Niktia Khruschev would send out political shockwaves throughout East Asia, and subsequently change the view of Moscow from an apprehensive ally to an open threat to Mao’s regime.

The initiation of destalinization in the USSR sought to critique the absolutist personality cult that had been built around the Georgian Strongman and its unquestionable grip on power. Not surprisingly, the influence of this move immediately threatened a similar notion which Mao was developing around himself (as well as that of Kim il Sung in North Korea) by unleashing similar political sentiments at home, that is empowering moderate critics of Mao who sought to reform China’s political system. Therefore, the immediate action of the PRC to preserve its own legitimacy was to effectively turn against the Soviet Union and contend with it as a geopolitical adversary. Thus the Sino-Soviet split was born.

In Mao’s mind, moves towards “reform” were interpreted as “revisionism” on his behalf. Mao Zedong teaches that revolution is continuous and a cycle and that the re-entry of bourgeois elements into the political system constitutes a threat. The hundred flowers campaign’s output and anti-intellectual purges were early signs of this. He attributed this to those who challenged the one man rule of China in this period and those who sought to build a feasible bureaucracy to run the state above his conception of pure human will. As a result of the developments in Moscow, Mao’s personal insecurity drove him to develop initiatives which would preserve the integrity of his vision for China and put them in the lead in the intra-socialist competition against the Soviet Union. This would first result in China going to war against India in order to weaken its relationship with Moscow and stifle its influence in South Asia, but its domestic implications would be far wider.

The first product of this was the Great Leap Forward (1958-1962) Mao wanted to achieve China’s economic self-sufficiency in agriculture and steel production through the empowerment of socialist communes. The idea was to create a leap in economic growth so profound that Beijing would be able to “leap” above advanced economies within years. The vision was highly utopian and out of line with economic realities. It was managed incompetently. Misguided campaigns such as killing birds (believing they ate crops and not insects), the impact of floods, mismanagement by local officials and their fear of reporting the truth led to a catastrophic outcome which killed millions, creating the deadliest famine in modern history.

Mao’s position was not surprisingly, severely weakened by the Great Leap Forwards and the political initiatives were swung now towards the reformers, forcing him to impose agricultural reforms. Not surprisingly, this made his political position feel insecure and that the “revisionists” and “counter revolutionaries” would take over the political system. As a result, in one last initiative to preserve his position, defeat his enemies and reaffirm his theory of continuing revolution, thus taking the hand against Soviet influence, Mao aided by the Gang of Four subsequently launched the Cultural Revolution in 1966.

The Cultural Revolution seen Mao claim that the post-great leap forward state had been infiltrated by revisionists and that the campaign would be used to restore its purity, as well as to purge from China everything that was deemed a bourgeois influence, including within its own history and heritage. Thus the campaign to “smash the four olds” was born too. In the short term, the campaign worked as it quickly led to all of Mao’s pro-reform opponents being purged and banished. However the broader consequences of extreme political instability, chaos, destruction of historical heritage, mass conflicts being red guards, public humiliations and killings objectively made the Cultural Revolution a total disaster.

Yet in the midst of it all was the geopolitical motivation. Mao believed he was the true global leader of socialism, not the Soviets. His own path of “continuing revolution” was to be a model for the world, rather than the “revisionism” pursued by Moscow. Therefore, the connotation that both countries ought to have been aligned because they were “Communist” is misleading and failed to see the rival power dynamics and aspirations between them both. China in no circumstances, even after Mao, seen itself as a subordinate to the USSR, but a power and pole in its own right. Given this, the extraordinary shockwaves of Destalinization was enough to set Mao on a trajectory which would attempt to permanently define his legacy as Communism’s number one.

This was in fact a Cold War inside the Cold War, the great leap forward and the Cultural Revolution were immediate products of competition and insecurity with Moscow. Although Beijing would ultimately outlash and outgrow the USSR, nevertheless as a irony for Mao’s own policies it would only be the disastrous consequences of these schemes which would see China reform, and thus set out on a real path of development. In the end, “revisionism” won, yet it would be this revisionism wherein China’s real success actually lay, which yet again as an additional irony superseded the stagnant nature of the Soviet Political-Economy.