A Brief summary of a history of technological partnership between North Korea and Syria. 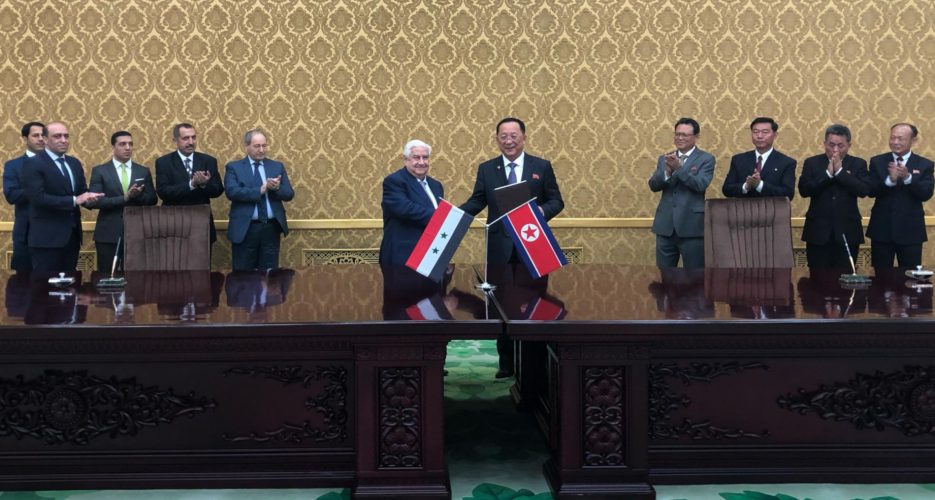 North Korea started a relationship with Syria in the 1960s when it provided military assistance to Syria and also participated in Arab-Israeli war of 1973 against Israel.

Later research and development that came out of that project was applied to Chonma-216 and Songun-915 series of North Korean main battle tanks.

In the 2000s, North Korea transferred production equipment to Syria for SCUD type liquid fuel ballistic missiles along with technological and technical cooperation involving research and development of a new warhead that would be a maneuverable reentry vehicle for Hwasong-9 that is also known as SCUD-ER along construction of transporter erector launchers.

It is alleged that Syria provided North Korea examples of 9M133 Kornet laser beam riding anti-tank guided missiles that are being produced in Russia. First report involving that was in 2009 that alleged examples of the missile in question along funding for reverse engineering were provided to North Korea by Syria which a 2014 document is accusing of Syria providing these North Korean reverse engineered copies of 9M133 Kornet to Hezbollah that were used in Israeli-Lebanese War of 2006 that lead to destruction of Israeli Merkava main battle tanks.

Syria providing 9M133 Kornet lead to development of upgraded 9M111 Fagot that replaced wire guided SACLOS with laser beam riding type of SACLOS. There are two known models, first was AT-4MLB that may have been demonstrated in 2008 to visiting military attachees from Myanmar’s military junta.

Second known model is known as Bulsae-2 that is used in the North Korean military and was used by Palestinian resistance group Hamas that conducted an anti-tank operations in 2014 that led to destruction of Merkava tank just outside Gaza strip.

This is the brief history of technological partnership between Syria and North Korea that lead to significant advancement in military technology for North Koreans.

Because of acquiring example of OTR-21 Tochka ballistic missile that is comparable to American MGM-140 ATACMS along being large leap forward in terms of range, accuracy and solid fuel technology compared to Luna-M series of artillery rockets.

Another is 9M133 Kornet which is one of most advanced anti-tank guided missiles that infantry can have and North Korea acquiring such from Syria and producing on their own leaped over South Korea that had 9K115-2 Metis-M wire-guided SACLOS ATGM in terms of technology and firepower until AT-1K Raybolt in 2017.

Another lesson is not to underestimate a country simply on basis of them not being as rich as their adversary nor as prosperous as them simply because of material wealth instead of having attention on what matters, capacity in technology and science.

After all, North Korea inserted a satellite into low earth orbit on their own domestic space launch vehicle before South Korea that relied on Russians for first stage of it.