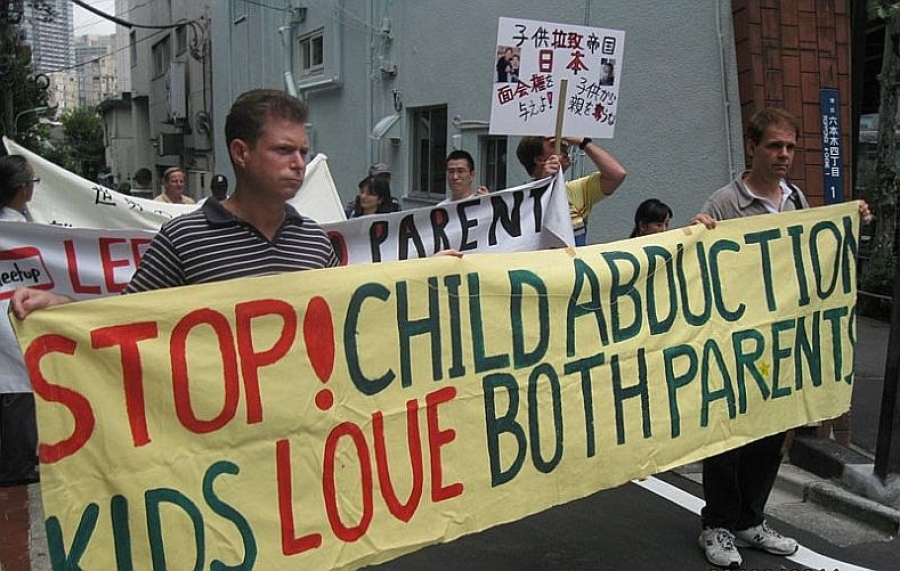 It is well known around the world that Democratic People’s Republic of Korea, also known as North Korea has abducted Japanese citizens since late 1970s. In the early 2000s the North Korean government admitted to Japan and confirmed suspicions of victims’ families that they had for decades. Despite the attention this issue has received, there is considerably less awareness outside of east Asia involving Japanese abductions for slave labor such as Chinese and Koreans during the second world war and colonial period respectively.

In the modern era, there is even less awareness of Japanese spouses abducting children from their foreign spouses when marriage goes awry. Such practice is also common in Japan between both Japanese parents and for which the victim ends up prosecuted if he/she tries to reestablish connection with their own children that was taken away by their spouse without their consent..

At the beginning of 2020 an Australian whom his Japanese wife took away children from him last year, he was arrested while attempting to find out the current condition of his children after a tsunami struck Japan in October 2019 after a 6.4 on Richter scale earthquake off the coast of Japan. This has again put a rare spotlight internationally on the issue of child abduction by Japanese spouses to the world in public. While the Japanese spouse can commit acts of child abduction against foreign spouses without fear of consequence and repercussions, foreign spouses are treated differently and harshly than native counterparts in Japan. Japanese courts have habitually favoured Japanese parents over foreign ones because they do not recognize abductions committed by their citizens from a parent that is a foreigner and non-citizen. As a signatory of the United Nations Convention on the Rights of Children, Japan is obliged to stop acts of child abduction. Japan is in violation of the Hague convention on Child Abduction and is in violation of the United Nations Convention on the Rights of the Child.

The Japanese government and its citizens have been active in the United Nations involving the abduction of their citizens by North Korea such as Megumi Yokota when she was 13 in 1977. Japan enacted sanctions against North Korea involving abduction while itself does nothing when its own citizens commit it with suspected assistance by the Japanese government. It is suspected that over 800 Japanese have been abducted by North Korea, over the years that number has been dropping as people alive or dead were found in Japan. The Japanese government denies that the country is an “abduction black hole” which Japan is nicknamed as such due to the rampant problem of parental child abductions by Japanese spouses, following statistics demonstrate otherwise.

There has been a dramatic rise of Japanese spouses abducting children from their foreign spouses, over 500 cases have been registered in the period from 2005 to 2009 from countries such as United States, Canada, United Kingdom, Australia and France in total. Hundreds of American children abducted from their parents by Japanese spouses and Japanese police refused to cooperate with the American authorities such as the Federal Bureau of Investigation, parents that tried to get their children back under their control were arrested under suspicion of abduction by the Japanese authorities. Japanese consulates are often suspected of assisting Japanese spouses in child abductions, such as in cases of abductions in the United States and Australia. As of May 2019, there are over 400 known cases of Japanese spouses abducting children to Japan from their American spouses.

Japanese law has absurdities involving parenting rights such as in case of child abduction from Cuban parent in Cuba when marriage was done a year after birth of the child, automatically under Japanese law only the Japanese parent has the right of custody over the child after the Japanese spouse abducted the child to Japan. Unlike many countries in the world, Japanese law does not recognize shared custody between parents over children. Japan has been in the past criticized by the United States, United Kingdom, Canada, France, Italy, New Zealand, Spain and Australia involving the issue of parental child abduction and refusal to sign Hague convention on child abduction that would give legal obligation to Japanese government to resolve the issue of parental child abduction that plagues the country. In European Union the European Parliament voted in favor of a resolution and to express concern over Japanese government not complying with international law in order to stop parental child abduction by Japanese spouses from European parents that are citizens of European Union as are their children.

Due to consistent resistance for decades by the Japanese government to uphold international laws it is signatory to involving child abduction hence an aspect of human rights that children have, we should not expect the issue of parental abduction by Japanese citizens that were married to foreign citizens and had children with them to be over in near future . Because of clear favourability of the government towards its citizens and discrimination against foreigners.

It also highlights double standards by the Japanese government over the issue of abduction such as child abduction by the North Korean government of Megumi Yokota while Japanese consulate assists in abduction of children from international marriages that their citizens had. There may be more confirmed cases of child abduction from international marriage by Japanese citizens than there are suspected cases of Japanese abducted by North Korea, even with other foreign nationals included in the abduction total by the North.

At this pace, the issue of child abduction by Japanese citizens might reach the 22nd century.