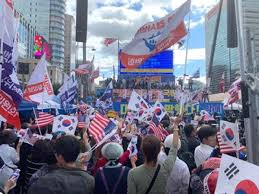 The Metropolitan government of Seoul has banned public protests and rallies amid fears of a Coronavirus outbreak following a surge of cases in the past 48 hours. Speaking at a press conference on Friday, City Mayor Park Won-soon statred: “We plan to ban use of Seoul plaza, Cheonggye plaza and Gwanghwamun plaza to protect the elderly who are susceptible to contagious diseases,”

The city will also shut down congregations of the Shincheonji Church of Jesus, with the current spike of cases having emerged from its branch in Daegu, to the South of the country after a 61 year patient attended, having refused to undertake testing for a week. The city has since been declared a “special management zone”.

South Korea now holds the most coronavirus outside of China, excluding the Diamond Princess cruise ship quarantined in Yokohoma Japan. It is the first country to also suffer from a community outbreak of the pathogen.