The Spectre of Appeasement in American Diplomacy 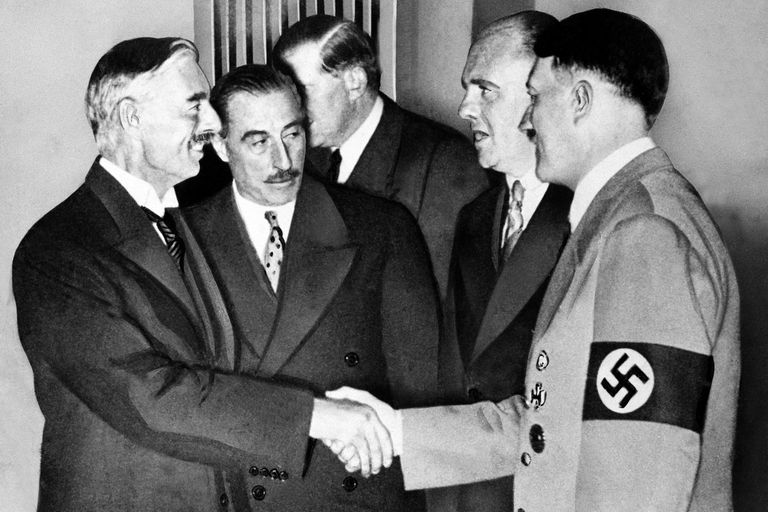 In 1938 British Prime Minister Neville Chamberlain struck a deal with German dictator Adolf Hitler which became known as the “Munich Agreement”. The deal, offering the Nazi regime territorial concessions in exchange for a purported peace in Europe, later became historically infamous for its role in empowering, rather than containing and confronting Hitler’s ambitions- it became widely derided as a factor in the outbreak of World War II as to how we know it. With it, the world of international relations and diplomacy came to understand the agreement as “appeasement“- that is defined here as the willingness to give an aggressor what they want for the sake of buying their complicity, than confronting them with the threat of retaliatory force. The legacy of this act proved an essential keystone of the construction of contemporary international relations theory and thus “realism” as it is known today.

Fast forwards to over 80 years later, a one to one summit involving the President of the United States and the leader of North Korea, Kim Jong un, has broken down and failed to achieve a result in spectacular circumstances. The unwillingness to accept a pragmatic outcome, largely fueled by more hawkish members of the President’s cabinet, appears to be the reason why. For long, the United States has demanded what it terms “the final and fully verified denuclearisation of the Korean peninsula” as its titular demand in diplomacy with Pyongyang, and has been unwilling to offer flexibility its pursuit of this goal, despite the more than obvious unwillingness of the North Korean state to concede its nuclear capability and be so naively placed in a position of strategic weakness to Washington.

It was hoped that the summit would produce a pragmatic breakthrough that would offer major concessions to Washington in exchange for partial sanctions relief, concessions that which would roll back, limit and cap North Korea’s nuclear capabilities in a way which was stabilizing to the wider international community. If you will, an inaugural first step that facilitated trust between Pyongyang and the United States which paved the way for further agreements in the future. Yet, it what was not to be. Owing to the influence of more NeoConservative minded foreign policymakers, America ultimately flipped back to their more assertive “all or nothing” approach and Trump pulled his “art of the deal” move of simply walking away from it. The outcome has proved concerning, as Pyongyang have already started to toy with the rebuilding of a satellite launch facility in order to show their displeasure with the US.

The mentality of some American politicians stretches back to the collective legacy of that fateful day in Munich 80 years. That is, the belief that offering North Korea meaningful leighway on its nuclear program is no better than a form of appeasement which would otherwise empower an aggressor and hurt American interests. Indeed, according to the rhetoric of individuals such as John Bolton, it is better for Washington to use the threat of force to push Pyongyang into getting exactly and only what is being demanded. America should request no less, expect no less, than “final and fully verified denuclearisation” as it goes. The North Korean regime should be squeezed until it bows to knee of the United States, than let off a leash for its nuclear ambitions.

For long, even outside of the issue of nuclear weapons, talk of “appeasement” of North Korea has long spouted from the tongues of the most ardent pro-US analysts, usually to deride all forms of engagement or good will towards the Pyongyang regime. According to these voices, there is no merit in any meaningful interaction with the country. Replicating the discourses derived from the the historical legacies of Nazi Germany and the Soviet Union, lies the mode of thought that no true good can come from simply being willing to talk to North Korea on more empathetic terms. Kim Jong un is an unnuanced villain out on a megalomaniac quest for power who cannot and will not be brought to reason, therefore the idea we can somehow pen out a better future in tandem is a betrayal of American values and on those grounds, there can be no compromise.

Yet in the aspect of North Korea, they are mistaken. The discourse of appeasement has undoubtedly a meaningful consideration of international relations, it would have for example, been unwise to negotiate with ISIS, but this frame of mind is not applicable to every single instance. Talk of appeasement is often soaked in a ad-reducio simplification of international affairs that depends on strong ontological representations of “Good vs. evil” in its approach, negligent of the complex political circumstances and legacies that condition the diplomacy of states. Despite its claimed attachment to Realism or Realpolitik, which recommends pragmatism and acting for the “greater good” rather than simple dogma or idealism as an approach to politics, the discourse of appeasement does not act as an empirically independent notion in the application of North Korea but is oft soaked in notions of American chauvinism and exceptionalism. That is, the image and representation of the DPRK as a cold war enemy. This strict rendering continues to ensure no-mid way is acceptable other than the dynamics of victory or defeat.

Thus, in an ironic twist, those who do not want to deal with North Korea are so blinded by these ideological constraints that they divorce themselves from the practical realism that making concessions in negotiating down Pyongyang’s nuclear program is substantially better than a pressure campaign whereby Kim would only respond in reciprocation by intensifying his nuclear ambitions to acquire greater leverage. Indeed, few understood that in 2017, the plentfora of North Korean missile tests was not simply the “menacing work of a madman” as so termed in the tabloid press, but was in fact a specified reaction to Trump’s pressure policy. Knowing that the president was out to tighten the screws, the DPRK scrambled to increase its missile capability at all costs in the consideration of one day securing future negotiations on favourable terms.

This discourse thus misses that component, reciprocity, that international relations is built on mutual considerations between states, than conducted in rigid moralistic terms. North Korea’s rationale for nuclear weapons is constructed purely in the notion that the country is just “evil” and there is no other explanation nor justification for it; a longstanding power deficit between Pyongyang and Washington, decades of hostility, a frozen war and a willful desire to change the country’s political system are simply ignored. The circumstances in which North Korea emerged and the Korean war broke out are similarly simplified into highly moralistic terms, directly derived from the war which proceeded it. In every instance, the assumption of righteousness clouds a reasoned approach to the wider circumstances. North Korea’s actions do not have to be endorsed, but they do have to be understood… in context.

Given this, American diplomacy towards North Korea continues to be plagued by the spectre of “appeasement” by some voices- the fixated belief owing from the rendering of an ideological framework that so stubbornly concludes nothing good can come of compromising with the country for the sake of stability, and the only acceptable outcome is not one merely beneficial or respectable to American preferences, but a zero-sum victory and triumph of good over evil. A controlled and limited nuclear North Korea is fundamentally a better option than a one which continues to drive forwards its capabilities in mutually pursued antagonism with the United States.