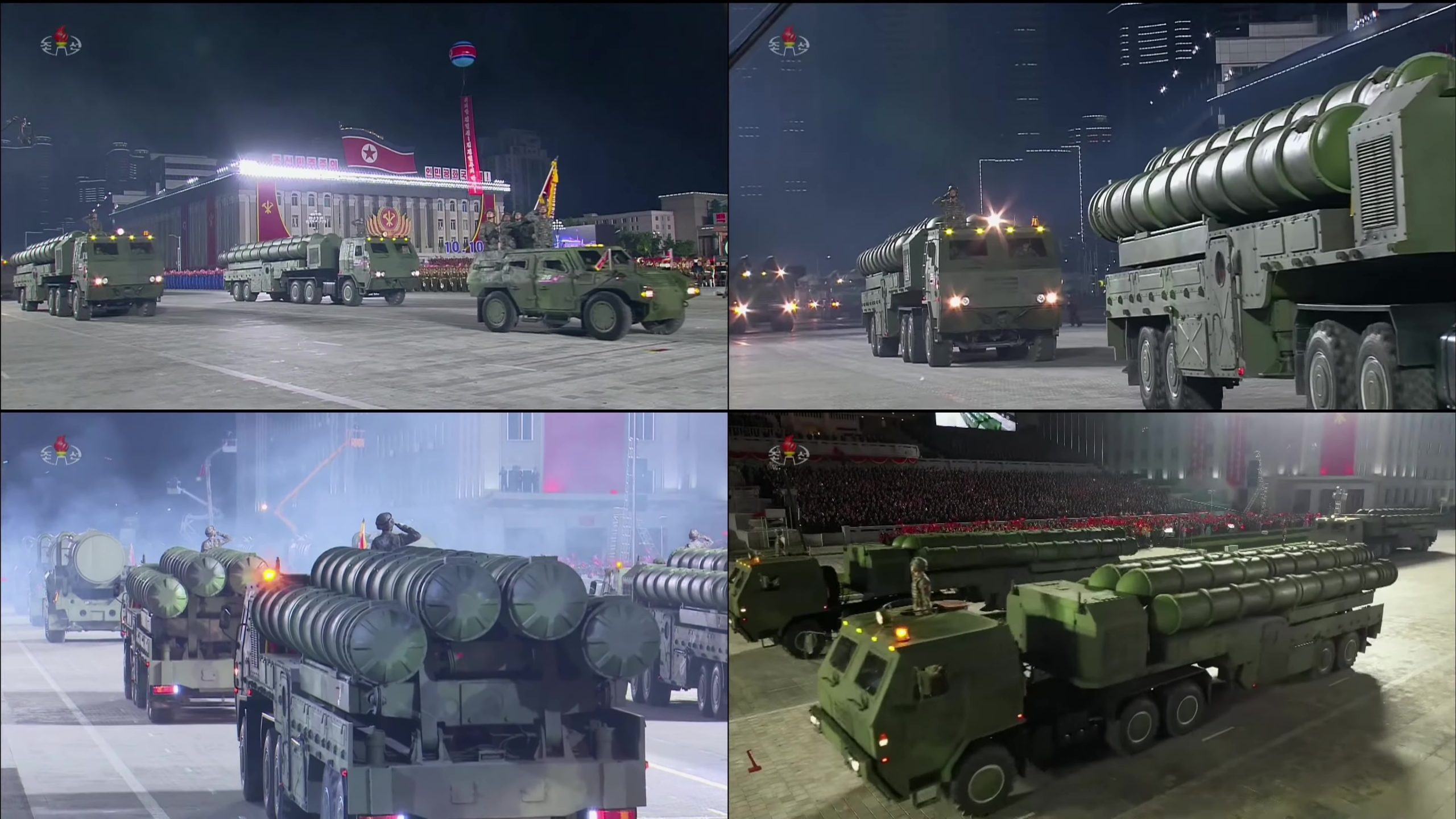 During the parade on October 10th at the procession of the 75th anniversary of Workers Party of Korea that is the ruling governmental body of Democratic People’s Republic of Korea, also known as North Korea, peculiar vehicles with long canisters on a trailer of a semi-truck cruised past Kim Jong Un. Some suspect it being part of Pon’gae-6system or new missiles for Pon’gae-5.

Pon’gae-6 is expected to be a system with objective of achieving performance of S-400 or being close to it while Pon’gae-5 is known to be a surface to air missile system comparable to S-300P series, specifically PMU1 and PMU2 models from the early to late 1990s that are equivalent to American MIM-104 Patriot PAC-2 and PAC-3.

While that may be the case, comparing images of new transporter erector launchers for Pon’gae-5 that was also in a semi-truck configuration with 4 missiles on a trailer instead of previously 3 missiles on a single truck. Both semi-trucks that tow these missile appear to be modified or derivative of ZIL-135 truck produced by ZIL that one of models carried Luna-M artillery rocket with ZIL-135  while also being produced by BAZ under designation BAV-135 that was used for multiple rocket launcher system BM-27 Uragan.

Missile canisters on Pon’gae-5 apparently have mounting on top in order for canisters to be lifted by a crane while on longer canisters what is speculated to be missiles for Pon’gae-6 or new ones for Pon’gae-5 do not have such mountings. That can also be found on canisters for Kumsong-3 cruise missiles that are derived from Kh-35 on Bal equivalent coastal defense cruise missile system. Possibility of either missile inside being too heavy or being inserted into the canister in a different way compared to Pon’gae-5 and Kumsong-3 canisters.

Canisters that carry new missiles have rings configuration in between those of Kumsong-3 and Pon’gae-5, former being equally spaced and having similarity of latter with middle  being reinforced with stronger dual ring and also at end of it additional rings that support the frame and integrity of the canisters. Due to design of the rear unlike Pon’gae-5, it seems that it may be a lid that hinges to open or pop off from the rear, this is due to the similar position at rear on top of canisters on Kumsong-3 that indicate a mechanism to lock the hinge in place until launch when the lid at the rear and front opens during preparations to launch the missile.

On Pon’gae-5 there are no protrusions that may contain the mechanisms related to controls of the lids nor possibly to feed the data required to the missile inside as evident on canisters of Kumsong-3 anti-ship cruise missiles on a coastal defense cruise missile platform system. Due to apparent considerably greater length to diameter ratio than that of canisters used on Pon’gae-5, form factor of canister seemingly suited for storage of long range cruise missiles.

While long range cruise missiles akin to Kh-55 may not outweigh a surface to air missiles used on S-300 systems, its contents may outweigh if the canister contains a supersonic cruise missile akin to BRAHMOS. If it is LRCM, it may have in range Guam and maybe even Alaska or if it is SCM then it may strike all over Korean peninsula quickly without giving much if any time to react. Kh-35 and Kh-55 use same family of jet engines for propulsion.

Besides the difference in canister between Pon’gae-5 and new missile canister is the trailer as on it there are rolled up cables that are unwinded and connected to commanding vehicles that gives order to launch with radar giving directions and corrections towards the target painted by radar. These cables are not presented on the trailer of the new missiles and also have in the middle of the trailer below missiles an apparent commanding room as evident by doors which is a clear indication of a standalone system that doesn’t require separate vehicle that issues commands to the transporter erector launcher system.

These two factors of canister having greater length to diameter construction than found on S-300P series as is with derivative Pon’gae-5 and apparent command room as part of trailer in center right below the missile canisters. On the basis of empirical evidence and logical deduction, it can be with certainty suggested that the vehicle in question is a standalone type of transporter erector launcher that does not rely on a separate command vehicle to act.

If that ends up being the case where we in near future watch broadcasted launch of a long range or supersonic cruise missile, then these as very missiles of that type literally along metaphorically flew under the radar of ballistic missile defense and that of our own judgement unlike surface to air and ballistic missiles.