Will the impact of the Xi-Trump G20 meeting impact China’s North Korea approach? 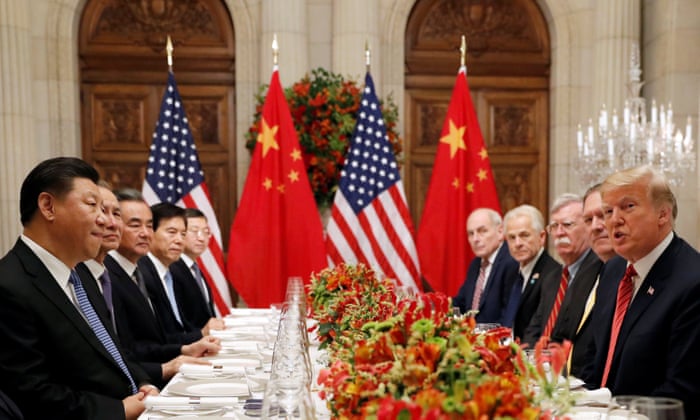 Saturday saw an impasse open up in the trade confrontation between China and the United States. After a year which has largely consisted of rising tensions between the two powers, leaders Xi Jinping and Donald Trump met together on the sidelines of the G20 summit in Buenos Aires, Argentina. During their meeting, they struck an agreement to suspend escalation of the trade dispute and commit to a period of economic days over a 90 day period. The move comes as a relief to markets, whom feared the risks of tariffs spinning out of control and imposing inevitable economic damage on the two countries. How the road ahead will lay out, however, remains to be seen.

Yet, the trade war was not the only issue discussed between the two leaders. On his Presidential statement, Trump referred to the issue of North Korean denuclearisation having been discussed. As you can imagine, because of disagreements, the highlighting of the issue was very vague. It merely specified that Xi had supported his bid for a nuclear free DPRK attained through the means of diplomacy with Kim Jong-un. On that note, it doesn’t tell us a great deal. Nevertheless, with China placing a priority on dialogue with the United States, eager to prevent the bilateral relationship from spiraling out of control via a President whom has came at Beijing on numerous fronts, some may be questioning if China will again harden their approach to Pyongyang; despite the rapid flow of diplomacy between the two countries from March onwards. Whilst negotiations between the DPRK and US are ongoing, the latter ultimately wants to keep pressure sustained as a form of leverage. The Trump administration has long shown its willingness to use the flouting of sanctions by Beijing companies and traders as a stick to hit it with- Thus will negotiations create a noticeable change on this issue?

Whilst China will ultimately be cautious, a large scale shift in Washington’s favour is unlikely. The negotiations set to occur between the two powers will indeed involve and to and fro game of “leverage diplomacy”, there is always an interconnection, but they are nevertheless bound largely to resolving a single issue, that is trade. As these talks go on, a whole range of other areas where China and the US are both cooperating and competing over at the same time, will continue, even if at a more subtle pace. This includes Taiwan, the South China Sea, One Belt One Road and of course, North Korea. As specified by the Trump administration, there is a widespread sentiment that the two countries are in a state of “strategic competition”- vowing for influence in various regions of the world, this involves the Korean peninsula; wherein despite cooperation and some commonality, Beijing and Washington nevertheless have very different long term visions of what they want to achieve.

As a result, despite being openly unhappy with North Korea’s behaviour over the past few years, the Xi Jinping premiership has set itself out to rebuild relations with Pyongyang as the situation on the peninsula alleviated. Talks between Kim and Trump have unsettled Beijing with fears that it could lose influence within the region as the DPRK has explored the possibility of a new relationship with Washington. The administration’s harder stance towards China has likely served to accelerate these feelings. The situation has only became more of a dilemma for Beijing as they cooperated in implementing tough new sanctions over Pyongyang for its nuclear program, reducing the leverage and influence which it had. Thus, the large scale diplomacy which followed in 2018, including multiple Kim-Xi summits, was an attempt to recover what was crumbling.

This inevitably poses dilemmas. There is no doubt Kim would have demanded sanctions relief, save Beijing would otherwise be completely alienated from the picture. Consequentially, as the region stabilized there were some signs that China relaxed the implementation of some measures whilst finding new loopholes for others, but nonetheless little to the extent sanctions were flouted and disregarded completely.  With its customs data no longer being released on specific commodities, it is hard to obtain a direct picture of what is happening. Nevertheless, it has instead openly called for sanctions to be reduced at the multilateral level, something Washington has outright refused to do. In turn, it has also regularly imposed treasury sanctions on violators, which often have turned out to be related to China (although not exclusively) in some given ways. Thus, when Xi Jinping decided not to visit Pyongyang directly and instead sent a senior politburo member, it was telling that he did not want to jump in too far and upset Washington.

This in turn creates a diplomatic quagmire. Beijing is squashed in finding an uneasy middle way between the two country’s demands. Both relationships, although for entirely different reasons, remain crucial for China to maintain. It is experiencing two sets of pressures. Upsetting either outright could be disastrous for its foreign policy interests. Competition with Washington must be somehow balanced against cooperation with Washington, the issue of the DPRK being awkwardly squashed into both categories at the same time.

As a result, China’s North Korea approach will not change drastically in response to the trade talks, but will “hang in the balance”, remaining cordial, subtle and ambiguous. It will not openly disregard sanctions, but nevertheless cannot shy away from trying to help Pyongyang in the few legitimate ways that are left in order to gain diplomatic credit with Kim Jong-un. It is likely to continue to present the image to Washington that it is earnestly upholding sanctions, a theme which emerged in 2017 as Trump escalated pressure on the issue.  Despite that the alleviation of crisis has occurred since, making sanctions implementation naturally less urgent, China has nevertheless found the political space to fully return to “business as usual” in every sense with the DPRK on an economic level. But, if the talks go well and the 2nd Kim-Trump summit goes ahead with more tangible progress on both fronts (trade and denuclearisation), Xi will certainly find he has more options to assist his neighbour.